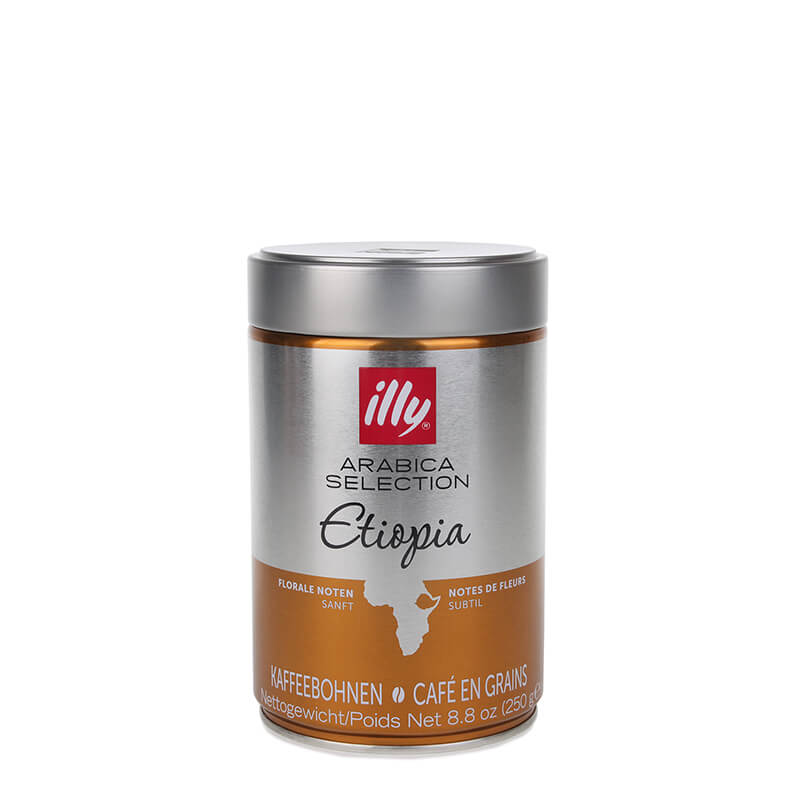 The 100 % Arabica beans come from the Sidamo and Yirgacheffe regions in Etiopia. The southern Yirgacheffe is considered the region of origin of the Arabica bean. This coffee, some of which still grows wild, is cultivated by many small coffee farmers in shady areas on coffee plantations, or even at home in their own gardens, and is carefully harvested by hand. The Selection Etiopia is pleasantly mild and aromatic.

Enjoy different characteristic espresso beans with very special flavour profiles based on their region of origin with the exceptional Illy creations of the Arabica Selection range. Coffee is believed to have originated in Ethiopia. The Arabica beans that grow in this country offer a delicate aroma of floral notes, perfected by the special roasting profile. The Illy Arabica Selection Etiopia convinces above all with its pleasantly mild aroma, as well as its floral jasmine notes and the slight hint of citrus fruit notes that resonate with every cup.

The corporate history of Illy

Illy was founded in 1933 by Francesco Illy, an inventor and visionary whose achievements include, for example, the preservation of roasted coffee. The coffee cans he invented were exported to many countries at that time. His son Ernesto Illy joined the company at the end of the 1940s and had the idea of also selling the coffee cans to consumers. Thus, the smaller portions of coffee were born. The Illy company quickly became one of the most important coffee manufacturers in the world. Today, the Italian company sells its coffee in over 140 countries and has also made it onto the list of the World's Most Ethical Companies several times.