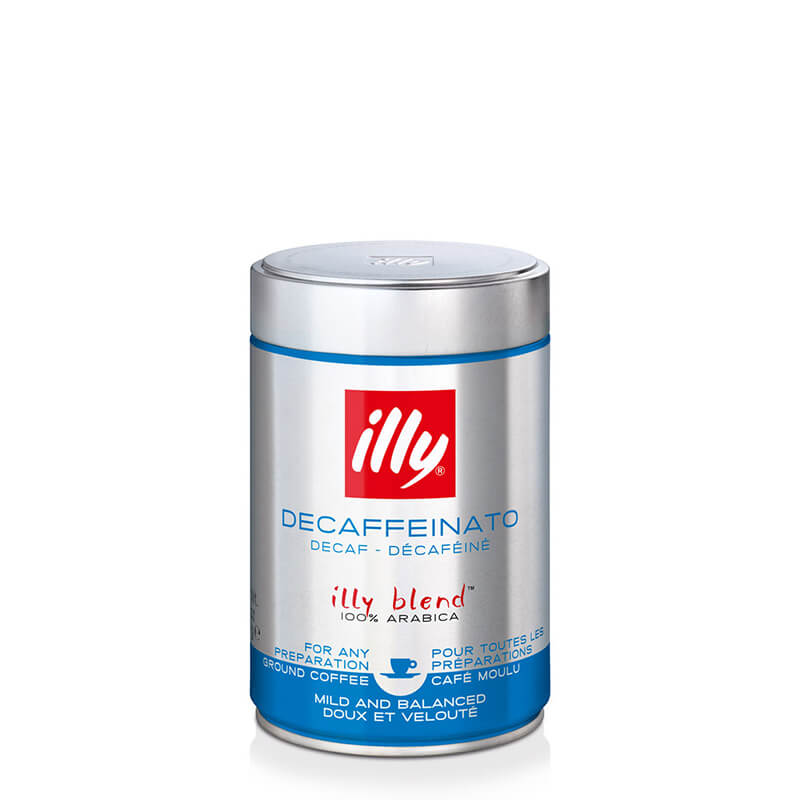 Nuances of chocolate and caramel

This decaffeinated espresso is made from 100 % Arabica beans and retains its full aroma. Notes of caramel, orange blossom and chocolate prepare a pleasantly sweet aftertaste. The Arabica beans come from the Central and South American highlands, as well as from Africa and India. The luscious crema is fine-pored and has a good stability. The sweet chocolaty taste is underlined by the creamy texture. The decaffeinated espresso is particularly suitable for a preparation in the portafilter and in the espresso maker.

The Illy Decaffeinato is the suitable alternative for all those who love real espresso enjoyment but want to consum their coffee without caffeine. The decaffeinated espresso, made from 100% Arabica beans, can be enjoyed carefree and around the clock without having to worry about the caffeine content. Carefully roasted to a medium roast level, the Decaffeinato brings out chocolaty as well as caramel and even slightly floral flavour nuances. This ultimately results in a coffee that is both powerful and pleasant, pampering your taste buds with a harmonious aroma composition.

The corporate history of Illy

Illy was founded in 1933 by Francesco Illy, an inventor and visionary whose achievements include, for example, the preservation of roasted coffee. The coffee cans he invented were exported to many countries at that time. His son Ernesto Illy joined the company at the end of the 1940s and had the idea of also selling the coffee cans to consumers. Thus, the smaller portions of coffee were born. The Illy company quickly became one of the important coffee manufacturers. Today, the Italian company sells its coffee in over 140 countries and has also made it onto the list of the World's Most Ethical Companies several times.

The green design is old-fashioned. Until now, the packaging design for Illy's decaffeinated coffees was dominated by the colour green. Now that there has been a design change, a light blue is the colour of choice for decaffeinated enjoyment. The content and quality, however, remain first-class.

No reviews found. Be the first to share your insights.
Foundation Modal